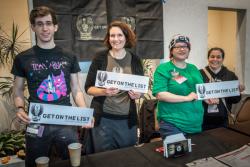 Arisia is pleased to support a number of charitable causes. If you would like to inquire about getting support for your preferred charity, email @email and we can help you find the right person to talk with. Arisia also runs occasional charitable events such as raffles or contest; no additional charitable events are planned for this year.

Arisians have been donating blood since 2004. Our donations support Mass General Hospital and Boston Children’s Hospital. The donation vans are only available for limited times during the convention, so we strongly urge donors to make an appointment in advance. Information on hours, how to make a donation appointment, and what we’ve done in the past can be found on the blood drive page.

Please bear in mind that Arisia does not make the rules for who can donate blood. We follow rules given to us by the receiving hospital.

On Saturday of the convention, Arisia attendees can buy baked goods in a sale that benefits the Tiptree literary award. This prize, funded by voluntary contributions, celebrates work in speculative fiction that explores gender roles. Information on how to donate baked goods, and when to get your tasty charitable benefits can be found on our Tiptree Bake Sale page.

Bone marrow donations are an important tool in helping people beat cancer. The bone marrow registry lets you sign up to get a simple cheek swab that enters you into a national database for possible matches. In the last three years, more than 200 Arisians have joined the registry and have been matched 12 times. The registry table will be set up in the Westin main lobby near the elevators.

The drive is run in partnership with Love Hope Strength, the world's only rock & roll cancer foundation, which hosts marrow drives at concerts, festivals, and other cultural events -- like fan-run science fiction and fantasy conventions -- nationwide. Contact Paul Kominers (@email) if you have any questions or are interested in getting involved.

In partnership with Arisia, during the convention Westin employees are able to pay a $5 donation to be able to wear jeans instead of uniform attire. The Westin donates the collected funds to a charity selected by Arisia. In past years, Arisia has selected Planned Parenthood and the Massachusetts chapter of the ACLU, among others. This year's charity will be announced in December.